Structural help to children in Uganda

Unfortunately, within CCP, we still have a large number of children infected with HIV from birth. In order to give these children the right care, not only drugs are needed, but also good nutrition to improve resistance. Other medication such as for the common malaria are also paid from this pot. Highly recommended.

IGA is an evidence based and important way to make the widows or guardians (grandmas/aunts) more economically independent. In principle, the women get two goats each. When these goats produce little ones, they can be sold so that income is generated. If they have five goats, some women choose to buy a cow (calf) from the profit of the goats. One goat costs (with transport and guidance) around 50 Euro. In addition to goats, other IGa’s, such as chickens or pigs, a sewing machine or money to start a small business can also be chosen. As many as possible CCP works in clusters of 12-15 women. These clusters form savings groups so that the women will help each other and learn to work together. The groups are led by a volunteer and social work.

Also look at the story of Dorcas and her mother.

Study fund / help a teenager to be trained

CCP has a limited study cost fund for young people studying at one of CCP’s vocational training courses but who do not have sufficient resources to pay for the study. So these are not CCP sponsor children. By helping such a teenager, he or she can learn a profession and you can sponsor a younger one for 2 years.

The annual Christmas camp in December is an unforgettable experience and highlight for the orphans. Together with many other orphans of ccp they work out a biblical subject in groups. During workshops they also learn skills such as making soaps, cookies etc. And of course the good meals and the games are not missing! All this for a small week. For this camp, the grounds of a boarding school are rented. For the teens there is a come together day with theme and Christmas gifts. During the camp there is also a medical check and letters are written to the sponsors.

Sometimes, after a long period of drought or rain, harvests fail and a dire shortage of food arises. And what is still for sale on the market becomes extremely expensive. In these situations, CCP comes to the aid of the poorest with extra food packages. Also in a family without parents, a so called ‘child headed home’ CCP where necessary. 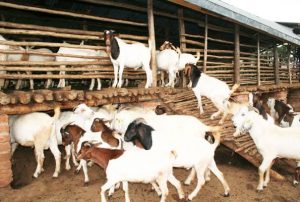 In order to be able to provide its own school meals and also because of the regular periods of food shortage, CCP has an agricultural project in Bunambutye, 45 km from Mbale. CCP owns a farm there with 85 hectares of fertile land. The farm is located in a remote part of eastern Uganda, where there is little employment. This agricultural project also offers additional employment to this poor population group! After some meagre and failed harvests due to too much rain or major drought, CCP has now started a goat farm. For example, CCP can supply goats to our goat project.

For several years now, CCP has been building simple cottages for widows/guardians and their families living in very distressing housing situations. A cottage costs an average of 2,800 Euro’s. Sometimes a piece of land also has to be purchased.

After the house of this widow was officially openend, she expresses her feelings of great gratitude.